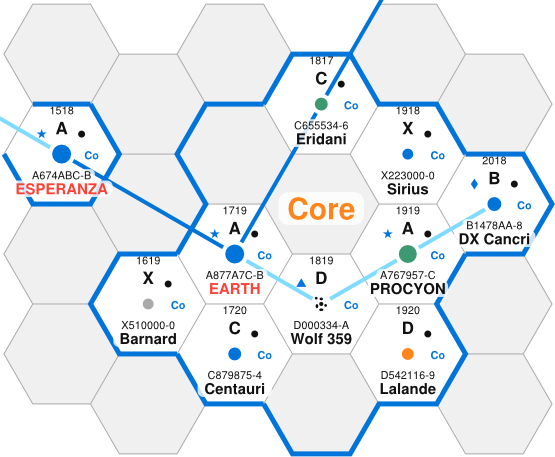 Until recently, Earth was dominated by a vast computer network called the "Virtuality". Over the centuries, hundreds of billions of people uploaded their minds into this "life after death". Eventually, living people came to be a minority who were largely excluded from decision-making. Out in the living world, nation-states still existed, cooperating through a fairly strong "Earth Union" - successor to the United Nations. However, aside from a tiny elite, most living people felt entirely disenfranchised. Many chose to go to the colonies rather than live as a second-class citizen.

In the last decade, telepathic radicals from the colony world of Esperanza have infiltrated, and entirely overturned this ancient, conservative society. One by one, they seized control of Earth's nation states, destroyed the Virtuality's data centres, and imposed their own brand of totalitarianism. Finally, four years ago the central Earth Union fell completely under their sway, and the remaining conservative nations were conquered in a short, bloody war. Today, the "Next Step" radicals are still consolidating their hold over Earth, whilst pushing aggressively on into the Outer Planets.

Earth's living society has ossified into a rigid caste-system:

The Elite can usually be identified by their entourage of retainers. They normally wear
their household crest, as do their servants. All Elite are addressed as 'sir' or
'maam', and eye contact should be avoided. Failure to observe these customs may result
in a beating delivered by the noble's followers. Such beatings are not strictly
legal, but they are widely accepted as normal. Few police forces will take action
against the perpetrators.
The wealthiest Favoured can afford servants of their own, although none will affect the
ostentatious entourages of the Elite.
Offworlders find Commoners the most approachable Earthers. They have a sophisticated
urban outlook. Only their attitudes to other castes surprises visitors. Naturally they
show the proper deference to their Favoured masters, but their disdain for the lower
castes can be quite shocking. It is considered quite acceptable to beat a lazy or
disrespectful servant.
Commoners no longer show much of their racial heritage. Everyone looks much like
C20th mixed-race Brazilians.

Commoners typically Uploaded when they died.

Peons tend to be less racially mixed than Commoners. They move around less, and retain
more of the features that are geographically associated with their birthplace. As a
result, racism is still not unknown amongst them.
Today the Underclass remains a vast underprivileged population. Those who stay on
Earth prosper through art and performance, or make a living as prostitutes or criminals.
Many leave Earth for a life of asteroid mining or as free traders, or for life in the
colonies.
Surprisingly, the Underclass have a monopoly on computer programming. Earth's other castes consider programming to be an
unsavoury occupation, because Uploads are generally so much better at it, and so the Underclass has made it their own. The
best programmers in Human Space are trained in Earth's Virtual University Of Software Engineering.
The Wheel of Life religion originated in the Earth Underclass over 500 years
ago. It still claims adherents even today. The religion emphasises good works and has
little to do with the spirit world.

The Outer Planets had a much more vibrant culture. Light-speed delays forced the Virtuality to be much more fragmented than on Earth, so uploads preferred to avoid the far reaches of the solar system. The Belt & Jupiter system are an economic power-house, concentrating on resource extraction, high-tech manufacturing and advanced R&D. Mars has been successfully terraformed, and has a population of 800m - Only the depths of the Mariner Valleys currently have a high enough air pressure for breathable atmosphere.

Almost a century ago, the invention of the J1+ drive brought the Core Worlds within easy reach of the Main. The Esperanzan "New Puritan" regime seized this opportunity, and began using Earth's industrial power to complement its own. A formal alliance between the Earth Union and Esperanzan Commonwealth lead to a series of wars that drove the Xa Imperium completely out of Corridor, and weakened its ability to regulate trade with the Long Republic.

15 years ago, the Esperanzan Puritan regime was overthrown by a telepath-supremacist group who called themselves the "Next Step". The telepaths have brutally subjugated "normals", both on Esperanza itself, and throughout the wider Esperanzan "Commonwealth".

A concerted campaign has allowed the Esperanzans to undermine the member states of the Earth Union. One after another, member states fell to Esperanzan-inspired pro-telepath "Next Step" parties. Ultimately the few remaining hold outs were crushed militarily, and the Virtuality was shut down - effectively killing the hundreds of billions of uploaded individuals. Telepaths cannot interact with uploads, and therefore Next Step ideologues deny their humanity.

The final collapse of the Earth Union came shockingly quickly. In its final days, a few hundred-thousand refugees were able to escape to Procyon, together with millions of uploads. The Outer Planets, and loyalist elements of the Earth Fleet assisted the refugees. It took months for the new regime to purge loyalist elements from the Fleet and bureacracy. During that time, Esperanzan Fleet elements opened hostilities against the Outer Planets, which were able to defend themselves surprisingly effectively. Finally, the purged Earth Fleet joined the battle, and decisively defeated the belters' ramshackle fleet.

Today, Earth is a highly regulated society, with Thought Police on every street corner. The Outer Planets occupied by the military. An underground resistance continues to fight an insurgency. The military use collective punishment and concentration camps to battle them. The Belt/OP population is too thinly spread to be controlled effectively by telepaths.