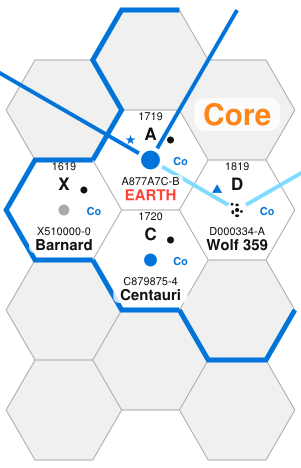 This binary system (Alpha=G2, Proxima=K1) is the closest star to Earth's Sun. The planet called "Centauri" orbits Alpha Centauri. Its land surface is mostly island chains and a few small sub-continents. There is lush green vegetation. Wildlife is mainly insect-like creatures, none of which grow very large.

The world was colonised by Earth's very first wave of slower than light ships. The early colony failed to develop much vitality. A second wave of colonists arrived once jump drive was introduced. These were mainly low tech utopian religious (Wheelie) communities from Earth's underclass. The original colony still exists, but it is just one community amongst many. The warrior castes of rival Wheelie nations regularly battle each other without significantly disrupting the majority of agricultural communities. There are chaos cults in the outback, which are feared by all.

The primitive Centauri colony was protected by an indulgent Upload elite on Earth. Now that the Commonwealth has taken over, it is only a matter of time before they begin to exploit such a valuable nearby garden world. Already there are plans afoot for "relocation camps" in the outback. The starport has a contingent of Commonwealth Marines, and the system is patrolled by a squadron of Earth Union frigates.