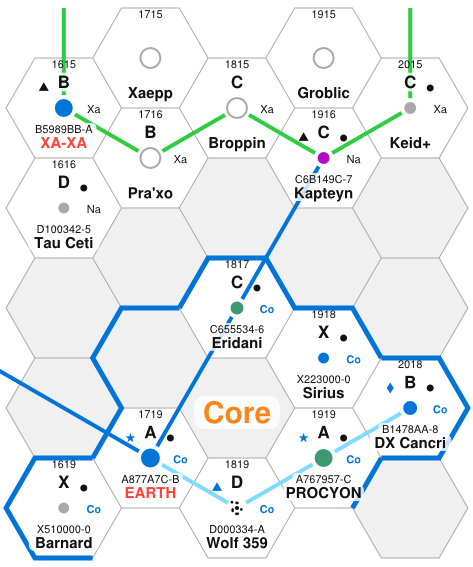 This system is the key waypoint for ships destined for Kapteyn and the Xa Imperium. Commonwealth starships regularly patrol the system, to discourage Procyon-registered vessels from using it. As a result, most Procyon traders now travel via Sirius.

The colony is on Epsilon Eridani b-4, a large gas giant moon, well outside the star's habitable zone. It is in the late stages of a centuries-long terraforming project - the thin atmosphere is now breathable, but the climate is still frigid. Giant orbital mirrors have been built to warm the moon, and sulfur hexfluoride had been added to the atmosphere to create a greenhouse effect. Algae have been introduced to the water oceans to create oxygen. Typical weather is snow, or icy rain. Terrain is barren, with pools of slime and occasional hoards of terrestrial snails.

Fluorite prospecting and mining are major industries - as vast amounts of SF6 are required for the terraforming. The gas is also exported to support alien terraforming operations. Food is produced in algal beds and energy intensive greenhouses, as well as imported. Snails are farmed for food. There is one major city, "Falstaff" (pop=80k).

In recent years, the Esperanzan Commonwealth have stopped anti-matter exports to Eridani, as part of their blockade of the Core Worlds. This has lead to food shortages and rationing.