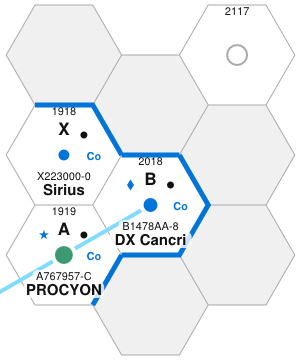 DX Cancri is a red dwarf star. The colony is located on an inhospitable gas giant moon. It was founded only a
century ago by William Chu, a young radical from Earth's Favoured caste. Chu is adored by his followers. His decisions
govern every aspect of life in the colony. He has preached rejection of the Uploads, and the destruction of the caste
system. Ever since, the colony has been a destination for Earth's disaffected. Chu still runs the colony, even though he is
now very elderly.
The Commonwealth has reached out to the Cancrites, arguing that they have a common cause
against the Uploads. Many Cancrites are sympathetic, but Procyon stands between them and
Earth, and Cancri is too poor to threaten Procyon in any case.