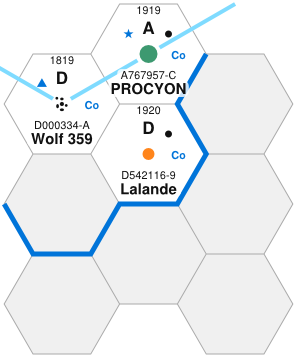 The only settlement on Lalande is a luxury villa belonging to Nora Herzog Wittelsbach, an Old Earth noble. Since the fall of Earth, the duchess now lives here full time - whilst still retaining a good deal of influence on both Earth and Procyon. The compound is defended by ground based weapons and two system defense boats.

The planet is a ghost, orbiting a red dwarf. The world used to support a diverse ecology, but its oceans and most of its atmosphere have been boiled away. Only the hardiest species have survived. A notable surviver is the Lalande sand worm - a brain burrowing parasite. As life on the planet dwindled, the larval stage evolved the ability to go into hibernation, lying dormant for incredibly long periods of time, until one of the few remaining hosts came along. Now all the hosts are gone, but billions of the larvae are still out there, waiting...