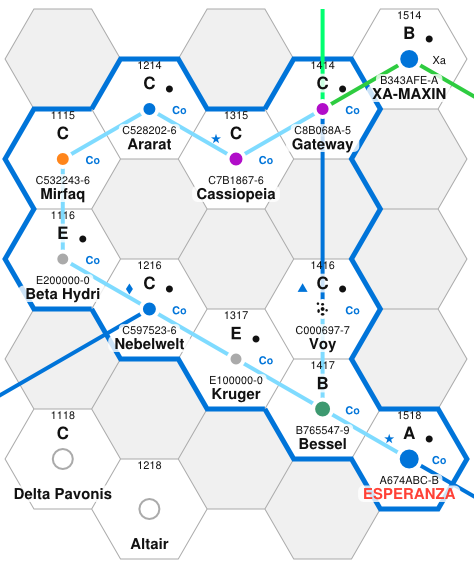 The Corridor, from Esperanza to Gateway.

Esperanza is a gas giant moon in the Epsilon Indi system. It was colonised many centuries ago, in the second wave of sub-light exploration from Earth. Esperanza's native flora is typically blue-coloured, although many Earth species have been successfully introduced - especially crop plants. The huge population mainly live in spawling cities. There is an orbital starport city (pop=10m), with a space-elevator linking it to the downport.

Esperanza is the capital of the Esperanzan Commonwealth, a tyrannical empire that governs the entire human Corridor as far as Gateway (1414). The Commonwealth is dominated by telepaths, who claim to be the "Next Step" in human evolution. Non-telepaths are treated as second-class citizens. Dissidents are in constant danger of detection by the "Thought Police", who can send them to "re-education camps" with only the thinnest veil of due process.

The Commonwealth has recently seized control of the Earth system, and has already made its first abortive attempt to conquer Procyon, the last bastion of human freedom in the Core worlds.

It was here that humanity had its first encounter with aliens. Esperanza lies at the end of a branch off the Main that was claimed by the Xa Imperium. Three years after first-fall, the colonists were amazed to detect a vast spherical alien craft entering orbit. The haughty Xa made it clear that humans were welcome to live on their world, but that they would be expected to pay tribute in proportion to their population. The stunned colonists had little choice but to acquiesce. Esperanzans became citizens of the Xa Imperium, learned to make their own jump-1 drives, and were eventually allowed some access to other Xa worlds.

The jump-drive designs were transmitted back to Earth, where the initial delight soon turned to frustration when it became obvious that only a handful of Core worlds were accessible from humanity's home world.

It was many years later that the Esperanzans discovered that they shared the planet with yet more intelligent aliens. The "Batwings" were a shy, telepathic race, with somewhat insectoid bodies. They lived in vast underground burrows, and shunned all contact with humans. Unfortunately for them, the Batwings both resembled Earthly "devils" and possessed inexplicable "magic" powers. Religious zealots grew to hate and fear them. The "New Puritan" movement arose, and began a series of pogroms against the Batwings. Eventually the Batwings were exterminated, but not before they had passed on the secrets of telepathy to many of their human sympathisers. The Puritans violent campaigns continued, and drove these "human witches" to the edge of exinction.

Not satisfied with waging war in their homeland, the New Puritans also embarked on a violent revolution against their Xa masters. A series of bloody campaigns established first their independence, and then increasingly large territories along the branch that has become known as the "Human Corridor". Xa and other alien populations were uprooted, and replaced by human colonies, under the sway of the "Esperanzan Commonwealth".

Earth's invention of the Jump-1+ drive, about a century ago allowed Earth to join forces with the Commonwealth, and launch the "5th Xa War". Together, they drove the Xa entirely out of the Corridor, and captured the world of Xa-Arrack - now renamed "Gateway". In the "6th Xa War", the Commonwealth allied with the Long Republic, and finally broke the back of the Xa Navy. Allied fleets penetrated deep into the heart of the Imperium, and razed all of their shipbuilding yards. To date, the Xa have shown no signs of recovering from this blow. The Imperium is a shadow of its former self.

17 years ago, the "witches" finally emerged from the shadows. Long laid plans were put into effect, and the Puritans were swept from power almost overnight. A secret group of human telepaths seized control and declared "Year Zero". The Commonwealth was revealed to be a hollowed-out state, the "Illuminati" had infiltrated almost every level of government. Puritan zealots were executed en masse. Only a handful made it to the safety of Earth, or of the Commonwealth's distant colonies. Many of those have now been hunted down as the telepaths have consolidated their grip on power, and subsequently moved to subvert and conquer Earth itself.

There are still a handful of Puritan colonies. Chief amongst them is New America, where a Commonwealth task force was recently beaten back, with the aid of Fteirle mercenaries.

Procyon is also host to a small Puritan population.