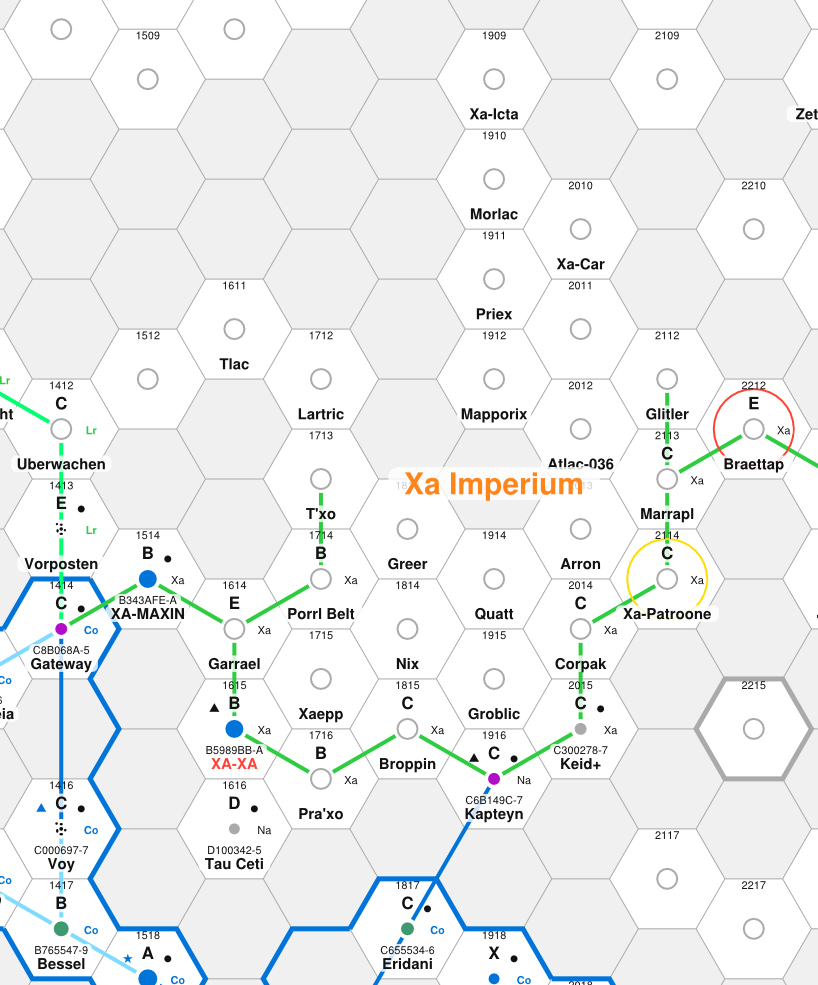 The Xa-Imperium as it is today.

When humanity first ventured to the stars, the Xa-Imperium was much larger than it is today. The Esperanzan Commonwealth has seized the Corridor branch. To spinward, the Long Republic - another human state - has pushed them back almost to Xa-Xa (1615), their home world. To trailing, their "Bol" slave species has rebelled and cut them off from everything beyond Braettap (2212).

The Xa are a short, warm blooded, bipedal species. They have no body hair, pale skin and large eyes. They strongly resemble "Greys" from ancient Earth conspiracy theories.

Procyon's knowledge of the worlds of the Xa-Imperium is limited. The Esperanzans guard their intelligence jealously. Attempts to contact the Xa directly, by Jump-1+ via Epsilon Eridani (1817) have been met with understandable suspicion. The Xa have restricted humans to their frontier world of Kapteyn (1916), although in recent years they have conceded to allow "Dog-star" a Procyon corporation to set up a starport on Keid/Atlac-219 (2015).

The Xa frontier with humanity. A hi-pop industrial world that is home to a large fleet, positioned to discourage the Commonwealth from trying to interfere in Imperial affairs. Maxin is too small, and the atmosphere is too thin for Xa tastes. Nevertheless, its natural resources, and proximity to human trade routes make it invaluable.

The Xa Imperial Capital, and home world. More than half of the planet's land surface is made up of temple lands, and religious estates. Almost a billion people are either priests, or their servants or tenant farmers. The High Priest's palace is a sprawling, grand, antique.

The Emperor's estates take up half of the rest of the land - they are kept as wilderness preserves, hunting forests and vast formal gardens. The Emperor's palace was destroyed by orbital bombardment during the last war with Esperanza. An ambitious replacement has been under construction for over 40 years - but technical difficulties, and shortages of resources continually push back the completion date. The Court inhabits a small corner of the construction site that has been completed as "temporary" quarters.

The vast bulk of the population are crammed into the remaining land area, or live on raft cities, or in orbital habitats. There are still many unrepaired bomb sites left over from the war. The main naval dockyard was completely destroyed - the site has been cleared, but reconstruction has yet to begin. The unemployment rate is astronomical. Most agriculture is done in seagoing algae tanks, which produce a nutritious sludge in a variety of unappetising flavours. Many basic foodstuffs need to be imported to support the population. The transport fleet is depleted, and ill-maintained, making the food supply chain somewhat tenuous. Some food items are rationed. Supermarket shelves are often empty.

The world's space elevator was destroyed by the Commonwealth during the last war. The devastated ruins of the world's former main starport still lies at its foot.

Tau Ceti was a prime target for the second wave of sub-light colonisation from Earth. At the time, it was believed to be a prime candidate for having an Earth-like world. When the colonists arrived, they were horrified to discover that the system contains only gas giants, and inhospitable rocky planets.

30 years later, a Xa expedition found the struggling colony, and offered to help them set up as a mining colony for the Xa Imperium. Today, the colony has regressed to minimal tech for living on a vaccuum world. The inhabitants live in underground caverns and live on vat-grown algae. The population diminishes every year as youngsters hitch rides with any passing ships that will carry them.

A formerly barren world, recently colonised by humans to act as a jump-1+ bridge between the Core worlds, and the Xa Imperium. Governed by the Kapteyn Agency - an agency of the Earth Union government, it is now garrisonned by Commonwealth troops. The Xa Emperor originally gave his blessing to the colony, but has complained on several occasions to the Commonwealth ambassador about the garrison.

Kapteyn also lies on the principle trailing trade route from Xa-Xa. The Emperor maintains a naval presence in the system, and controls access to the two gas giants.

The world itself has a methane atmosphere. Kapteyn's star is a red dwarf, so agriculture is difficult, even under glass. Colonists live in buried habitats, and domed areas on the surface. There is a small conference facility, maintained to encourage trade and discource between humans and Xa.

This is a basic starport, built on an airless gas giant moon. The Xa Imperium pays for the upkeep of the starport, mid-way between Xa-Xa and Xa-Patroone. Humans from Procyon have built a second starport facility on a different moon of the same gas giant. They call the moon "Vulcan", after a fictional planet in this system. They are selling fuel more cheaply, and hope to win custom away from the "official" port.

Little is known of the other worlds in the Xa-Imperium.

Pra'xo (1716) There is a small population of Xa on this Mars-like world.

Braettap (2212) Desolate. Currently being interdicted by the Xa Navy. This has cut off the entire trailing Main from trade with the Xa.