I've been using (and testing) my new hex-map library. Here's a map of England. 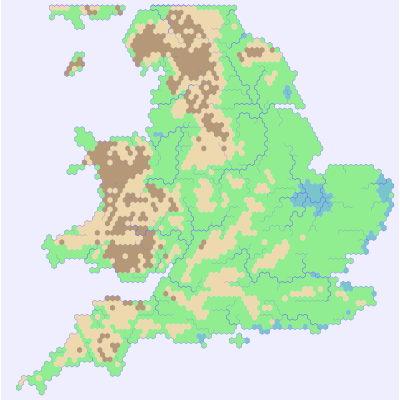 It was generated by a little program that uses NASA's SRTM data as input. The light brown hills are just high ground, but the dark brown hexes are both high and hilly - my program samples the elevation, and calls a hex hilly when the elevation's standard deviation rises above a set limit. The rivers are drawn by selecting sample locations and then finding an optimal route to the sea. The routing is done with something like Dijkstra's algorithm - it mostly wants to go downhill, but will jump over small rises if necessary to get to the sea.

The rivers look plausible, but there are quite a few problems, if you look closely. For example the Welsh headwaters of the Severn flow North into the Mersey on this map, but in real life they turn South.

Anyway, the map looks pretty good. It's certainly good enough to form the playing surface for my online game (don't ask). Writing the program was way more interesting than generating maps by hand. I only found a single bug in libhex, which is heartening.